Like an eccentrically-sited camera taking angle-shots that distort but may often reveal otherwise masked lineaments of truth, the deaf person watches from the unexpected and unguarded quarter.

TUQ = The Unguarded Quarter. What’s it about?

Lots of things, with an obvious slant towards deafness. It covers being deaf, hearing impairment, disability at some stage, media, other things as well. The Unguarded Quarter continues my life-long exploration of deafness. TUQ stores much of the writing I’ve been doing for years. While I gradually add more content from the past, including material from before the Internet era, I also keep writing new material.

It’s endlessly fascinating. If you take any slice of life, and look at it through a deaf lens, you often get something no-one’s thought of before. Deafness is a rich and wholly unknown part of the human condition. I think most deaf people reach their own accommodation about being deaf, and in doing so, bring their own particular insights to the vast and colourful tapestry. It means the politics of deafness is never static. Deaf people themselves don’t necessarily agree on matters, and even well-intentioned hearing people sometimes leave me speechless. It’s infuriating, exasperating, hilarious, and most of all, fascinating.

Why ‘The Unguarded Quarter’?

The full quote from David Wright is above. The critical part is ” . . . the deaf person watches from the unexpected and unguarded quarter”. I first read that in 1975. Many years later I came back to it. It’s the only comment on a deaf person I’ve read that for me has stayed rock-steady and consistent.

It doesn’t make any judgement about deafness.

Yes. That’s one reason for its appeal. And it suggests that to be deaf could be something very different from what it is usually assumed to be. It was an extraordinary thing to write in the late 1960s. I like the quote, very much.

Who are you and what do you do?

I’m a writer. But that doesn’t pay the mortgage. I have worked for the Victorian Government in disability policy. And previously I’ve worked as a subeditor on newspapers and magazines for the Fairfax/Rural Press group. As an editor for several community publications. As a freelance writer. I also worked for deaf organisations, and the state government human rights body. And for six years I assessed income tax returns. And once I was a ball boy for the Victorian Open Tennis Championships.

What and who made you who you are today?

My upbringing and education. The people, deaf and hearing, who influenced me. And what I needed to do to come to terms with being deaf.

Three separate blogs. One is current – ‘The Unguarded Quarter’. Two others are archival and deal with a stay in hospital (A Pain in the Poo Factory) and long-distance railway commuting (Commuter Diary).  There is humour too, mainly in ‘The What?’ series. This takes excerpts from popular culture, and makes one of the characters deaf to see what happens. This website stores much of my earlier writing on deafness.

As The Joker said, why so serious? Deafness cries out for it.

What will be in the blog?

Original writing, usually on deafness, but not always.

What will make this website and blog different from all the others?

The subject matter for one thing. And the quality of the writing; that’s important. Occasionally I will commission other writers to contribute. Other deaf people, some hearing people.

To write on deafness?

Books for sale! Two are memoirs about growing up deaf and about coming to terms with being deaf. Deafness Down and Deafness Gain will be released shortly. There will be eBooks and print books. There is information on both, and you can read extracts. The Quest for Edith Ackers is a novella and available for purchase. It’s a thriller, set in the 19th century during the aftermath of an infamous event in Deaf history known as the Congress of Milan. All books available in print and as eBooks.

Enjoy what you read. Comments are welcome; they will be moderated. Feel free to quote, and thank you for acknowledging this website as the source.

All stories on this website, unless indicated otherwise, are by Michael Uniacke. Many have been published elsewhere, and the original source is acknowledged. 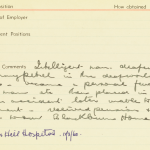 UNIACKE, Mike: Visited him yesterday. Appeared confused, and smelt of the drink. Could not explain his absence from Divine Service for the past month, … END_OF_DOCUMENT_TOKEN_TO_BE_REPLACED