About Michael Uniacke, about writing

My working life has had two distinct streams. One is in community development, policy work and disability. The other is in writing, and in editing and publications work. The former pays the mortgage; the second mostly doesn’t.

I have worked in all three tiers of government in Australia, most recently in disability policy for the State Government of Victoria. A part-time job at the moment is with local government, in the rural access program in Mount Alexander Shire in Castlemaine, in central Victoria.

Previously I’ve worked as a subeditor on newspapers and magazines for the Fairfax/Rural Press group. I did stints with Earth Garden magazine, with community publications, and I founded one of Australia’s first community newspapers on disability.

Being deaf played a critical part in the way I became a writer. At school, I couldn’t hear television, and so I turned to books. I read a great deal, absorbing the nuances of language and acquiring a strong English vocabulary.

Later on I realised that almost no-one ever wrote about deafness. When the subject of deafness appeared in print, it was written by hearing people who used bleak and negative language to press the point that being hearing only ever mattered.

That has been one of the drivers of my writing life. Deafness is richer and more subtle than that. The other is that as a writing subject, deafness is like a vast, untapped and unexplored region. I like going into new territory. And very far from being a narrow subject, stories around deafness are stories about people who deal with extraordinary situations everyday.

Yet I do not write exclusively about deafness. I have written regular columns on subjects like gardening and self sufficiency, and long-distance train commuting, and a blog about a stay in hospital. You can read both these last two, published as blogs, on this website.

For the moment, history is a consuming writing interest. The Quest for Edith Ackers, the novella now available for purchase, is part of a wider historical fiction novel. Humour likewise has a rich appeal where deafness is concerned – have a look at the What? series.

The website captures some of the writing I have done over the years. There is new material and there is older material. Together I hope they give a distinctive insight into something that is very common yet which remains wholly unknown. 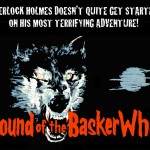 Artwork: John Veeken www.johnveeken.com The famous London consulting detective Mr Sherlock Holmes was playing with his revolver in his rooms at 221b … END_OF_DOCUMENT_TOKEN_TO_BE_REPLACED