In captioning politics late in 2007, a deal between the Liberals and the Democrats to investigate television captioning showed some promise

If the Federal Government likes to live dangerously, there is a good example in the deal stitched up last month between the Democrats’ Senator Natasha Stott Despoja and Communications Minister Helen Coonan. The deal came about after Senator Stott Despoja tabled a motion to call for an inquiry into the state of electronic media captioning for the millions of Australians who are deaf and hearing impaired.

She will now get what she was after. Senator Coonan announced an investigation that will look at what has happened in captioning and other “essential access technologies”. It will assess where Australia is compared with the rest of the world, and look at access to captions in the light of the rapid technological change that has taken place in media. The Minister said the investigation will be completed by April 30 next year (2008), with a report to be tabled in Parliament.

Had Senator Stott Despoja’s proposal been debated and defeated along party lines, the Government would have looked decidedly ugly. It was already looking silly on this issue when the Department of Families, Community Services and Indigenous Affairs supported the production of a DVD called Raising Children. This will be distributed free to parents of newborns. It was touted as a world first: an interactive guide with information and short films for new parents.

The Deafness Forum and the Human Rights and Equal Opportunity Commission pounced on the DVD the moment it was realised it had neither captions nor an audio-description track. These omissions ensured the DVD was close to useless for new parents who were blind, deaf, or who had vision or hearing impairments. As a result, the department contradicted its own disability action plan, of which one of the key themes was to “improve the accessibility of our information products for people with disabilities”. And for the inimitable, Monty Pythonesque touch, this defective DVD was launched by a hearing-impaired Prime Minister during Hearing Awareness Week.

In one piece of recent good news, the Film Finance Corporation has now made it compulsory for feature films it supports to have captions. To enjoy such films will require attending a cinema that will show captioned films. And the bad news? There are exactly ten cinemas in the entire country which show films with captions. The inquiry will be able to ask, why, with such commendable policy, is there such a miniscule number of cinemas in which to show them in the first place?

Senator Coonan’s press release announcing the inquiry commended the free-to-air broadcasters for approaching their 70 per cent captioning targets for programming between 6am and midnight. Prime-time FTA television captioning has already been guaranteed by legislation since 2001. Those wishing to view captions on television must purchase a television with teletext. And this is the rub. Apart from deaf and hearing-impaired people, almost no one in business or government bothers. Very few of the thousands of televisions in hospitals, waiting rooms, hotels, offices, shopping malls, motels and other public places come equipped with teletext. Countless videos and DVDs used in hospitals, schools, TAFEs and universities do not have captions. A large number of television programs are not captioned, for example, daytime sporting events.

The news is hardly much better for those who might give up and rely on DVDs for the captions track. Media Access Australia monitors new-release DVDs, and in its last survey, found a mere 51 per cent included hearing access in the form of subtitles or captions. Inaccessible DVDs like Raising Children continue to be churned out. A recent series of National Geographic DVDs on wildlife themes, promoted and distributed by the Herald Sun newspaper, have no captioning track, and no audio-description track for blind and vision-impaired people.

New technology and new services have left captions well behind. Unlike FTA broadcasting, there is no requirement for captions on prime-time subscription television. Digital multichannels are exempt from captions, and DVDs of television programs, or their downloads off the Internet, do not include captions even if they were on the originals.

These are some of the most recent examples of what has plagued deaf and hearing-impaired Australians watching television and film. The inquiry however will be able to scrutinise all of these issues. When it looks overseas, it will find examples like the UK Film Council. This government-backed agency has just allocated 500,000 pounds to allow independent local cinemas to improve access, such as buying and installing equipment to provide captions and audio-description. Included in Senator Stott Despoja’s original proposal was a call for captioning everything on television by 2011. The inquiry will find out this would merely give deaf and hearing-impaired Australians what their American counterparts are already enjoying now.

While FTA broadcasters are moving towards their captioning targets, it needs to be remembered that captions, to the extent we already have them, did not arise from the goodness of the corporations’ hearts. Captions on television and film happened because deaf individuals stood up and lodged complaints under the Disability Discrimination Act. These complaints started a chain of enquiries and negotiations between the Human Rights and Equal Opportunity Commission, film and television companies, film distributors, and advocacy agencies for deaf and hearing-impaired people. With a fresh round of negotiations imminent for both film and television, the inquiry will show film and FTA broadcasters where they stand in relation to Senator Coonan’s call.

Let there be no doubt of the importance of captions. Pressing the mute button does not equal the experience of hearing impairment while watching the television or at the cinema. It is much worse than that. A hearing aid, a cochlear implant, a listening device, a volume set close to maximum, some lipreading, or a combination of these may allow comprehension of words and phrases here and there. But no one will understand the entire dialogue. And no one has ever managed to lipread the penguins in Happy Feet.

It is most interesting that Senator Coonan’s press release referred to a “personal link to deafness”, something she shares with Senator Stott Despoja. This factor must surely have played some part in uniting these two from different political parties. The inquiry is good news for millions of Australians who ask for nothing more than the chance to enjoy film and television, whenever they wish, in whatever medium, just as do hearing people. In the end, Senator Coonan deserves credit. And Senator Stott Despoja, who has fought on this issue for years, will be remembered as a visionary.

This article appeared in Online Opinion in October 2007 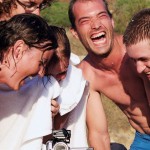 When I was 18, I fell in with a group of young people. Like me, they were deaf. All of us spoke; at that time none of us used sign language. Among … END_OF_DOCUMENT_TOKEN_TO_BE_REPLACED