Is there any connection between the recent Invictus Games, and disability, and deafness? Not much, writes MICHAEL UNIACKE.

AT FIRST GLANCE, it’s not hard to mistake the 2018 Invictus Games with the Paralympics. It’s all there – teams from several dozen countries, flags, sports wheelchairs crashing into each other, obvious amputees, all jousting amid fierce cheering and inspiring stories of guts and heroic determination. It might be a sporting celebration of disability, and of course, without a single deaf athlete.

But it’s not the Paralympics. To become a competitor in the Invictus Games, you must have been a soldier; a current or former soldier, who was  wounded, or who acquired injury or illness as a result of your military service. This suggests that sudden onset of traumatic disability is a common defining feature of competing athletes. That’s a significant difference from those for whom disability is congenital, present since birth.

Invictus stands for a particular subcategory of disability. The word ‘conquer’ abounds in reading material about these Games, not surprising given the military context. ‘Invictus’ is Latin for ‘unconquered’. That brings up a semantic gulf between the disability rights movement, which has been around in Australia since the late 1970s, and the Invictus Games, founded in 2014. It becomes apparent that what Invictus competitors are conquering is captured in the last two lines of the poem ‘Invictus’: “I am the master of my fate / I am the captain of my soul”. This is about a few things, such as rehabilitation, recovery, learning new things, recalibrating one’s relationship with the world, and testing oneself.

On the other hand, I seriously doubt that a significant number of people with disabilities, notably those born with disability, would really think of disability as something that must be ‘conquered’. Speaking for myself, I could no more conquer deafness than I could conquer my knee or my elbow. A desire to ‘conquer’ is just not there. This might account for my intense irritation at the idea of ‘conquering’ mountains, for example.

Equally, I have no doubt that many hearing-impaired people, who have acquired deafness later in life, do strive to conquer deafness, and do wish for normal hearing. When it comes to mountains, I prefer to think that climbers who pride themselves on ‘conquering’ a peak are really talking about overcoming their own fear, and testing their own limits, rather than the subjugation of an extremely large and pointy rock.

There is no link between deafness and the Invictus Games. The idea of deaf people serving in the military remains distinctly odd, but it does happen. In Libya in 2011, there was a small number of deaf fighters who battled with the rebel forces against Gaddafi loyalists to overthrow the Libyan dictator. The Israeli Defence Force has had deaf soldiers for some years. Those are stories for another time.

What did turn my interest to the Invictus Games was a plaintive cry on FaceBook from a disability activist. This person lamented a triumphant Invictus competitor who declared: “I will never be defined as disabled”. Those seven words capture the critical gulf between those born with disability, and those who become disabled. Such a gulf captures my growing conviction that disability needs to be redefined, or at the very least, that disability is becoming so diverse as to make the traditional definition unwieldly.

If sport resembles war with rules, then the Invictus Games make a lot of sense. I’d like to think that these soldiers with disabilities, and those for whom disability has always been part of their lives, could come together. It would be thrilling if the drive and energy of these wounded soldiers, and maybe their anger, turbocharged the push for disability rights and access. But I still have no idea how deaf people could fit into this picture. The unity of sport goes only so far. 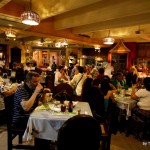 A forensic account of what goes on for the lone hearing-impaired person at a dinner party. Part 1 - Before you even get to the table You don’t … END_OF_DOCUMENT_TOKEN_TO_BE_REPLACED