I used to run classes in basic Australian sign language (Auslan) at adult learning centres in rural Victoria some years ago. As a diligent tutor, I always looked for ways to make the classes interesting as my pupils ground their way through simple words and sentences Now, what would possibly go wrong with teaching my eager pupils to sing in Auslan a happy and simple song like Old McDonald had a Farm?

What an innocent little baa-lamb was I.

For starters, there was no sign for our hero, Mr McDonald himself. There is a sign for McDonalds, but to no-one’s surprise it refers to the well known fast food joint. It was not the sign to use in this song, otherwise the first line would translate as “old and very popular hamburger restaurant chain had a farm”. This would imply concepts such as corporate vertical integration strategies and agricultural and resource economics: weighty subjects indeed for a cheery little singalong.

Therefore I had to invent a convenient sign for the elderly Mr McDonald. I decided to fingerspell M-A-C, and insisted that the context made it quite different from products made by the Apple Corporation. After all, one should not assume Mr McDonald would be up with the latest in information technology.

It got worse. In an unfortunate coincidence, the Auslan sign for ‘farm’ resembles a gesture you might make to indicate advanced pregnancy. I think this sign was supposed to indicate farmers as jolly, prosperous and therefore ample of girth. That makes it a very old sign indeed.

But there was no way the venerable Mr McDonald could be pregnant. (Mrs McDonald in her younger days, possibly, but we are getting off the track here.) My pupils sniggered and made laboured jokes about Mr McDonald and morning sickness.

The popular refrain in Old McDonald is “E I E I O”. What could be easier? As it happened, it was the next thing that went wrong. In fingerspelling these vowels, all they needed to do was point to one of the three middle fingers.

The secret of fingerspelling vowels is to not think about which finger stands for which vowel. That comes with experience, but for beginners it produces a stop-start reaction. The jolly but incessant beat quickly gets ahead, panic sets in, and at this point, the brain in its mercy shuts down for some moments. So while the cows were a-mooing, the ducks were a-quacking and the horses were a-neighing, my beginners gazed in rapture at their fingers. What are these long funny pointy things I’ve got? What do they do?

If Mr McDonald’s little song was a handful for an adult education class, then teaching Silent Night was a dubious experience, probably because I taught it during a really good party. Precisely why a small group of partygoers begged me to teach them to sing Silent Night in sign language on a freezing night late in June (this is the southern hemisphere, people) was a mystery that will never really be explained.

Anyway, we got through the first two-and-a-half lines rather well, all drinks and things considered. Then we hit the sign for ‘virgin’, and our partying learners erupted in merriment. There was a short intermission while they staggered off to find their friends, and soon, little signs for ‘virgin’ sprouted around the living room. I managed to round them up and our little song-signing class lurched on.

Progress was not good. Attempts to sign the concept of “tender and mild” had much more in common with the procedures which I believe are necessary in a breast self-examination than in the mystic contemplation of the baby Jesus. Our little class ended when someone put on the Madonna track Like a Virgin, and the lusty singing and dancing owed more to paganism than reverent Christiandom. Obviously, context was important.

At least teaching simple songs in sign language was a good way to zero in on what the lyrics are really supposed to mean. And last I heard, there was still no sign of a clever Auslan instructor on Mr McDonald’s farm. 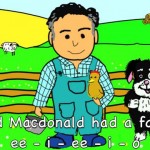