Among Castlemaine’s veteran commuters there are hushed whispers of a train to Melbourne which is believed to depart Castlemaine at 5.28am. This is the Ghost Train, because within that witching hour, no human being can survive more than a few minutes.

On the space-time continuum, the polar opposite to the Ghost Train is the Skulk Train, perhaps more commonly known as the 8.06am. The Skulk Train is the commuters’ train of last resort. These shameless commuters shut off their alarms for another hour of fitful dozing. The 8.06 is the very last train they can catch, just before thoughts of a sickie creep into the brain, and like an irritating advertising jingle, defy attempts to evict them.

The Skulk Train is named because it is nearer to 10 am when at last, our backsliding commuters sneak and skulk into their Melbourne offices. They keep their heads bowed, avoid eye contact, walk in quick, short steps, and attempt to glide unobtrusively into their chairs and look instantly busy. The contrast with the elites is painful. The upright Six-oh-Twos have been long, long at their desks. They are regally composed, gaze disdainfully at their later colleagues, and cast ostentatious glances at their watches with sharply indrawn breaths.

Back to the point. The Skulk Train sees the overlap between the last of the commuters and the first of the youthful old-age day-trippers to Melbourne. This latter group is easy to spot. The gentlemen are in striped shirts, neat jackets and sensible shoes, and the ladies wear their customary beige twin-sets. Their conversation, as they stand on the platform and  peer uncertainly to the north, is frequently thus:

“Now Fred. Are you quite sure you closed the kitchen window?”

“Yes Wilma. I am quite sure I closed the kitchen window.”

The Skulk Train sees maroon-clad students from the Sacred Soul College in Kyneton. They lounge creatively in the bicycle racks and use the travel time to study their lessons, using small rectangular devices with headphones. They rhythmically nod their heads in agreement with their lecturers. It is a pleasure to see such diligent, neatly attired and well-mannered school children. The future of our nation is in good hands.

At Commuter Diary, we are occasionally found on the Skulk Train, for research and strategic purposes. An immediate difference on this train is the ticket-checking style of the conductors. At Conductor College of TAFE, students in Ticket Checking 101 learn the basics and develop their particular styles. Ticket Checking 201 has students mastering the more complex nuances such as Affirmative Grunting and Satisfied Harrumphing. However for some reason the Skulk Train seems to attract conductors who have passed elective subjects at Conductor College, in particular, Disapproving Sighs 202. All have gained at least a credit pass in Spotting the Backsliding Commuter.

However, perhaps the backsliders, like the nice bloke riding his horse in Clancy of the Overflow, have pleasures that we earlier Commuters never know. after all, it is they who soak in the wondrous glories of the silver-frosty pastures, sparkling in the early morning sunlight.

This entry appeared on the Castlemaine Independent website in 2013 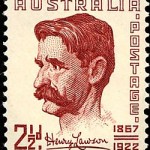 Did Henry Lawson create idyllic scenes of yarns around campfires because he was deaf and could not take part in them? IF HENRY Lawson was alive … END_OF_DOCUMENT_TOKEN_TO_BE_REPLACED