At twilight, we creep back to our evening train. Pale and listless after a day in the towers of Melbourne, peering at important pieces of paper, many a Castlemaine Commuter takes narcotic comfort in that learned publication, the Mx “newspaper”. Therein are stories such as Kim Kardashian’s crisis with armpit hair, and the first sightings of Justin Bieber’s baby bump. These induce a glassy-eyed stupor that generally lasts until Gisborne.

And thus, we at Commuter Diary were agreeably semi-comatose one evening. We gazed idly at the two strange pointy things reaching into the darkening sky on the plains just beyond Keilor. They resembled electricity pylons which had graduated from a Jenny Craig clinic. Just as we were wondering if these things were part of the international Search for Extra-Castlemaine Intelligence, a pleasant young man, in a crisply ironed blue V/Line shirt and a smart red tie, stopped by.

Would we like to take part in a survey? Certainly, we replied. I’ll be right back, he said. But in V/Line-World, time is an elastic concept. He finally re-appeared just as the Macedonians were jostling at the exit doors.

We enjoyed a civilised conversation. Yes, we thought the carriages were warm, on the whole the service was reliable, and yes, Kevin Rudd was in an interesting position, not to be too specificity about it. And were there other things we wanted to raise? Yes, there were. Was the track geometry at Woodend going to be all right? And could V/Line perhaps organise motor-racing events at the Calder Park Raceway so us weary commuters could have something to enjoy for the few moments the train passed around the back? The racing cars would of course need to have their lights on, we added helpfully.

The nice young man stared at us for some moments. Yes, the track geometry at Woodend would be fine. As for the racing cars, he explained that while V/Line’s strategic plan to enhance deliverables specified priorities for optimising achievable outcomes, racing cars tended to be a non-core business function, however monitoring protocols would ensure adherence to relevant business objectives.

Sadly, this nice young man was from Corporate.

We pointed out that racing cars go round and round, not getting anywhere, and commuters likewise go back and forth, not getting anywhere. Surely, we insisted, V/Line would facilitate an effective utilisation of ongoing inherent synergies to demonstrate effective responsiveness to the engagement of critical stakeholders on the existential pointlessness of our dull lives?

By this time the train was slowing for Woodend. The nice young man then said he needed to pop out to check the track geometry. Well, be careful your prioritised synergies don’t spin out of control at Outcomes Corner and crash into your critical stakeholders, we shouted as he scurried down the aisle.

Correction: Last week’s Commuter Diary referred to the school in Kyneton as the Sacred Soul. This school is in fact the Holy Heart. Our policy is to correct errors of fact as soon as possible. We pride ourselves on high standards of accuracy, and thank the many astute readers who brought this to our attention.

This appeared in the website of Castlemaine Independent in 2013 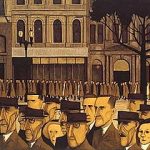