When I was 18, I fell in with a group of young people. Like me, they were deaf. All of us spoke; at that time none of us used sign language. Among these people I quickly found a significant point of difference between people who were deaf and people who were not. It was laughter.

Until I met deaf people, laughter that came from words was rarely funny. I never caught those vital words, those unexpected twists that made everyone around me heave with merriment. When it happened again and again, it seemed as if the world was passing me by. Worse, I developed a nagging feeling that I was becoming too stupid to understand the joke even were I to hear it. I came to dislike people who loved jokes, and laughter was becoming something I feared. It was becoming easier to avoid people altogether.

Looking at the history of deaf people, a particular theme emerges. Since the late19th century, influential hearing people have tried to eliminate sign language, and therefore, much of what it means to be deaf. The reasons were many. If you were deaf you could not hear the Word of God and needed to be saved. Speech was the common transaction of all humankind, and educators and missioners saw it as their duty to bring the deaf into the fold by insisting that deaf people be taught to speak.

And of course, there was the herd of elephants lurking in the room: the fear of difference. What could be more different than people who communicated, not through sensible words that everyone understood, but through a baffling confusion of moving fingers, flapping arms and grotesque expressions?

These fears and misconceptions have been disproven, but never really go away. Just a couple of decades ago, the advent of technology in the form of the cochlear implant provoked a fresh round of predictions of the demise of the deaf community. But this distinctive community has always rolled onwards. Its greatest boost was the recognition by linguists in the 1960s that sign languages were genuine languages, and in particular, the recognition and naming in the 1980s of the Australian Sign Language as Auslan. This was the standard-bearer. A shared language not only emphasises a sense of community among those who use it. It gives a real and enduring possession of a kind that allows a culture to thrive.

Yes, there is a sense of a Deaf culture. It is many things; it includes certain behaviours, nuances, traditions, and attitudes. The cap D in Deaf, commonly used when referring to its cultural aspect, is a case in point. It is about a particular way of looking at the world. You might call it your tribe, your mob, or perhaps, the place where you belong.

I was part of this 1970s wave of young people who were drawn to the deaf community. I quickly discovered how communication with deaf people was so much easier than with hearing people. For some years my world was filled with deaf people. I gained a sense of self, I grew in confidence, and became far more adept at negotiating the complexities of communication with hearing people. That 1970s social crowd of boisterous young deaf people were just the same as any social crowd of young hearing people. On the edge of reaching out into the world, young men and women talk about the much the same things. And often there was a lot to laugh about. 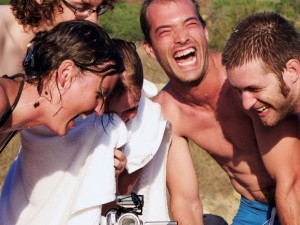 With these deaf people I had met, that was an astonishing difference. It was quite simple. On the cusp of a punch line and even just beyond it, my deaf friends held back their laughter. Did you get it? Did you understand? Did you catch the words? And when all in the group were in on the joke, only then, was the laughter released. Quite spontaneously, we all helped each other understand.

The meanings of words like community and culture can be elusive, but there are times when you just plain know how much you belong. In that first moment, when it was the company of deaf people that changed laughter from something I feared into something that was affirming, joyful, and shared, I knew I had found my tribe.

This essay first appeared on the website of Culture Victoria http://cv.vic.gov.au/stories/a-diverse-state/a-sensory-experience/the-laughter-of-the-tribe/ in February 2015 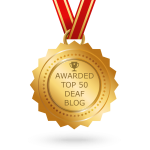 Should deaf and disabled actors be the only ones eligible to play roles that feature disability? It might seem they have a compelling case, but … END_OF_DOCUMENT_TOKEN_TO_BE_REPLACED