Harry Potter, the boy wizard, became a bit deaf early in his career following an accident involving a cup of tea, four paper clips, a rubber band and a particle accelerator. However he has just made it into Hogwarts. NOW READ ON . . .

Harry had to rub his eyes as he stepped into the entrance hall. It was unlike anything he’d seen before. All around him, the great, stone walls stretched up to a ceiling too far away to properly make out. The walls were adorned with flaming torches, and the hubbub around him rose as his fellow first-years looked around. Not that he could hear what they were saying, of course.

The more he watched the students around him, the more he wondered what on earth they were talking about – the entrance hall was exciting, but it didn’t seem to warrant the looks of horror on the faces of his new classmates as they looked behind Harry to the back wall.

Before he had a chance to follow their line of sight, Harry screamed. He felt as though a big bucket of icy cold water had just been thrown over him. Or thrown through him, if that was possible. He stood shivering with fear just as much as cold as a see-through apparition floated before him, grinning slightly.

The ghost spoke again but it was a lost cause. Harry could barely lip-read the people around him, let alone an apparition in medieval garb.

Harry was trying to shake off the shivers and avoid the stares of the other students when a stern looking older woman with lots of wrinkles and grey hair came towards the assembled group. She was wearing long robes and carrying a wand. Harry was impressed.

In a soft voice, she began to talk quickly. Harry couldn’t catch a word, so instead looked at the students around him. They were all watching intently.

“Hey Ron” he whispered to his new freckled friend, standing next to him.

“Mydongle?” Harry replied, but Ron was concentrating. Harry knew that this whole wizarding world was a bit strange but talk about a stupid name, he thought.

The fact that Professor Mydongle barely moved her lips as she spoke seemed at odds with the sheer number of wrinkles that populated her face. Harry tried to imagine what her normal life might be like, outside of the grandeur of the Hogwarts entrance hall. He had a sudden image of her sitting in an armchair by a roaring fire wearing pink pyjamas, a pair of fluffy slippers and the same pointed witches hat. A loud laugh burst from his chest as that picture wafted through his mind and he quickly tried to stifle it. Heads all around him turned his way and Professor Mydongle’s stern face seemed to float towards him. As usual, her eyes flicked up to his forehead. Her mouth twitched a little in the corner. Was she trying to smile?

With a swish of robes, Mydongle turned away from Harry and headed across the entrance hall. She waved her wand nonchalantly towards the great doors that stood at the other side of the hall. The crowd of students swarmed forward and into the room on the other side. If it was possible, it was even grander than the entrance hall. Four tables stretched down the length of the room almost as far as Harry could see. Flags and torches adorned the stone walls and the ceiling resembled the night sky, with stars twinkling overhead.

The tables were packed with students, all peering closely at the pack of first-years. Harry felt like he was on display, following the throng down the hall in between the tables. Harry wondered with apprehension what was going to happen next. All around him, the first-years looked stony-faced but resolute, they knew what was coming. Harry had no idea. He hoped he could just find a little spot at one of the tables and hide.

Professor Mydongle stood a small stool in front of the crowd of first years. Oh no, Harry thought, they were going to have to talk to the school – answer questions or something. The professor wasn’t finished though. She placed a dirty, tattered witch’s hat on top of the stool. Everyone was silent.

Without warning, she stared straight at Harry and gestured for him to sit on the stool. Harry panicked. Why on earth did he have to go first? Maybe he could will himself to disappear? Maybe he could pretend to be blind as well as deaf? Without any other viable option presenting itself, Harry slowly walked towards the stool, keeping his head down.

He looked up at Mydongle as he got to the stool.

“I’m sorry Professor, what do I have to do?” Harry asked.

“Just sit down please.” She was very stern.

She lifted the hat and Harry sat gingerly on the edge of the stool. A thousand faces stared at him. He gulped. Professor Mydongle pushed the hat down on his head, the floppy brim hanging over his eyes.

Harry was just about to pull his wand out and try to do something – anything – that might please the crowd, when someone started speaking. Harry spun around, trying to work out where the voice was coming from, but everyone’s lips were still. Then it dawned on him. It was the hat. He could feel it shifting around on his head slightly as it spoke. Harry stifled his initial impact – to throw the hat to the ground and hide under the stool whilst denouncing everyone in the hall as evil witches (only really half true) – and instead tried to look like he hadn’t just wet himself a little bit (completely true).

It was clear that everyone in the room was listening intently. But to Harry, the hat just sounded like a cross between a foghorn and a tractor. There was only one thing to it, Harry thought. He pulled the hat off his head and held it out in front of him.

“I’m sorry,” he announced to the room in response to the outburst of gasps, “but I have to try to lipread him. Er, her. Ah, it. The hat.”

The hat wriggled in his hands as he held it out in front of his face. Astonishingly, the sound was emitting from an open seam between the brim and the head. The seam moved up and down, imitating lips, but otherwise there was no human-like movement.

Harry focussed on the ‘lips’, concentrating as hard as he could.

“Harry, you’ve got some leaves and wood in you,” the hat said.

“Sorry, what?” Harry stammered, “You want me to turn myself into a tree? I don’t know how to do that yet. I could try, but…”

“No, Harry. I’m not sure where to race to. You could go anywhere.”

If it was possible, the hat seemed frustrated, but Harry had no idea what it was talking about.

The room erupted in laughter. Harry went with it.

“Look I’m sorry, but if you just tell me what you want me to do.”

“Ok then.” The hat settled in Harry’s hands and paused for a moment. “You can choose. You’re either Flip-A-Pin, or Rip-And-Roar. It’s up to you.”

“Your choice,” the hat seemed satisfied in its decision to let Harry choose for himself. What he was choosing, Harry had no idea. He thought for a moment, keen to get this over with.

The great hall was silent. People turned their heads, whispering to each other. Had he said something wrong? All at once, every student at the table to Harry’s right jumped to their feet in a united cheer. Rip and roar, they all shouted, excitedly. They clapped and stamped their feet. Some of the older ones were gesturing to Harry. He looked back at the hat, whose seam-lips were curled up at the corners. I think he’s smiling, Harry thought to himself.

Without another thought, he jumped off the stool and ran to the table. He was ready to rip and roar.

Mattie Uniacke is a Melbourne writer and artist.

Next time: In Regency England, a deaf Lizzie Bennett makes short work of an unwelcome suitor in “Pride and What?” 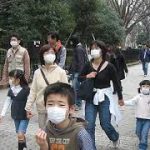 It’s critical for deaf people to see faces in order to communicate. So what do they do when hearing people start to cover their faces? According to … END_OF_DOCUMENT_TOKEN_TO_BE_REPLACED