Films often show scenes of women gathered in their powder room during interval at the cinema, or at a social event at the local town hall. We see them peering into mirrors and chatting with girlfriends as they adjust dresses, plot strategy, review tactics, and perhaps even powder their noses. They are going about women’s business.

Films have been slow to catch up, but men are now getting the equivalent treatment. We watch scenes of men standing and facing a wall, going about their business, and usually washing their hands afterwards. In every scene like this, the men are talking to one another.

Toilets, being toilets, are spaces lined with hard surfaces. Tiles, laminex, and occasionally marble, cover every flat and vertical surface. There is nothing to absorb sound, which bounces and reverberates everywhere.

When I worked as a subeditor for a major media group, a newspaper executive would frequently ruin my occasional quiet standing moments in the Gents. This earnest, driven man had the unnerving habit of appearing to need the Gents pretty much at the same time as I did. Worse, he made a point of always standing next to me. I could have coped with that, but not with the way he insisted on chatting to me.

He went on and on and on. His words echoed, looped and bounced in an unpleasant barrage of noise. Could I understand a word of what he was saying to me? Is the Pope a Protestant?
Here, the mind works at the speed of light. The issues flashing through the Emergency Critical Response section of my brain were: (a) was he saying something important? (b) would I gain something were I to see his face? And (c) was it even worth it? We would be standing side-by-side for mere seconds, ten, maybe 15, plus a few more for the shakedown, tuck and zip.

In mere nanoseconds, my calculated responses were (a) he was an executive. Of course he would

I suppose it takes practice, but whilst standing and attending to nature, I am quite careful about taking my eye off the ball, so to speak. Twisting enough to take in the face of the man standing next to me is a risky manoeuvre. The hips may follow the head, with appalling consequences, and it’s much worse if you happened to be wearing light-coloured pants.

If it becomes unavoidable I would use a one-handed technique which I would describe as one of relaxed vigilance. Some men, I am sure, prefer to keep both hands on the steering wheel. (That approach of course presents consequences for a signed conversation that do not bear thinking about.) The skilled one-handed operator learns not to tense up and distract it from its vital  guidance function. Or as a bureaucrat might say, to maintain strategic direction.
I stayed with two hands, locked them into position, threw a glance at the executive, adjusted my facial expression to match his, raised my eyebrows pleasantly, and made a short but emphatic multipurpose grunt intended to translate as “well, that is most interesting”. Then I resumed critical monitoring of outflow. He said something more before attending to shakedown, and I repeated my multipurpose grunt, but I kept my eyes on the job. He seemed satisfied, and so was I – for getting away with it again.

My experience of working in mainstream media left me with an impression of a fuzzy machismo among some of the men. I doubted this newspaper executive indulged in sexist jokes; his voice lacked a poorly-suppressed snigger that makes me instantly wary. But he seemed to be enlivened by this obvious male space, and his voice carried a loud brash edge that I recalled from the gyms and boys’ changing rooms of schooldays. So I judged I had some leeway with what I could get away with.

But why, why could I not pee in peace? 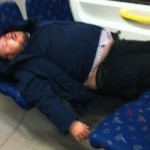 Commuter Diary 2 Exhausted before 7 am, our dogged commuters are dozing before Malmsbury. Almost to a person, the Castlemaine Commuter falls asleep … END_OF_DOCUMENT_TOKEN_TO_BE_REPLACED