It’s critical for deaf people to see faces in order to communicate. So what do they do when hearing people start to cover their faces? According to MICHAEL UNIACKE, it’s about common sense. 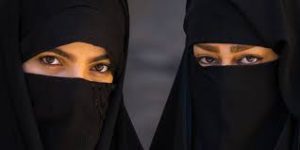 IT WAS A MOMENT from 12 years ago I still remember well. My family had sat down to a breakfast in a café in Sydney road in Brunswick, in Melbourne’s inner northern suburbs, when in walked two Muslim women, both clad in niqabs. Only their eyes were visible in their long flowing robes.

We had rented out our house in Castlemaine, and moved to Brunswick. While Castlemaine has been described as Brunswick North-West, none of us had ever seen niqab-clad women in Castlemaine. These two women sat at a table opposite us. I had my back to them. However my partner, Shirl, and our daughter, Mattie, had a full-on view. The Muslim women had ordered food, it was served, and the conversation at our table became significantly distracted. Both Shirl and Mattie realised they were about to witness an answer to one of the mysteries of life for non-Muslims: how on earth do you eat in public while wearing a niqab?

THERE WAS AN ARTICLE in The Conversation earlier this year about the increasing use of face masks in Asia, particularly in Japan and China. Normally one would think of medical reasons, and that’s true. Other reasons given were for pollution, for hygiene, to minimise exposure to pollens, and sometimes even for social reasons – so people won’t bother you. According to Casey Baseel, writing in The Japan Times, the proliferation of face masks can be so common that sometimes Tokyo offices look more like operating theatres. As Baseel writes, there is even a trend for face masks as fashion accessories, appearing in floral and polka-dot patterns.

That’s a sticking point. Anyone with the most rudimentary knowledge of deaf people should understand how critical it is to see the face of a speaker. If you’re deaf, it doesn’t matter if you sign or not. The face is a gateway to what people are saying. Facial expressions are part of Auslan; signing with a poker face is the verbal equivalent of sounding like a robot. It’s why the late Stephen Hawking could be extremely funny. His one-dimensional synthesised voice was wildly at odds to some hilarious responses he gave in interviews, like this one – start watching from 1:00.

In everything I read about the impact of face masks, it’s unsurprising to realise that no-one had thought about their impact on deaf people. That’s when I commented in The Conversation on that very point – that face masks present a significant barrier when deaf people want to communicate. Professor C Raina MacIntyre, Professor of Infectious Diseases Epidemiology and Head of the School of Public Health and Medicine at UNSW, wrote the original article in response to a reader’s query. She replied immediately to mine:

This is an important issue for many health workers too – they feel it is a barrier to communication with patients. Health workers on paediatric wards are also concerned about scaring children by wearing a mask.

So perhaps these health workers could wear Spiderman masks?

In Professor MacIntyre’s response, it’s an issue even for hearing people. I can see a hint of a workable solution: plain common sense. My dentist uses a face mask when operating, and when he wants to ask me something, such as why I haven’t been flossing, he pulls it down. He does that because he knows me, and because I’ve raised it with him. When he’s heard my latest excuse for not flossing, he gives an exasperated sigh, pulls up the mask, and resumes work. The point here is just to tell people.

WHEN I ONCE interviewed a group of Muslims for a story for a disability magazine, I also raised this point about the niqab and communication with deaf people. Their answer was simplicity itself: “We will always find a way for communication to take place.” And in a similar fashion, that was what happened in the café on Brunswick street. As Mattie told me later, all the two Muslim women did was lift their veils slightly to allow them to take spoonfuls of food. We laughed at how ordinary it was. Common sense can be so ordinary that it’s easy to overlook.

Artwork: John Veeken www.johnveeken.com Maria Von Trapp was prancing about in an Alpine meadow in the Austrian Alps, singing her way into our hearts, … END_OF_DOCUMENT_TOKEN_TO_BE_REPLACED